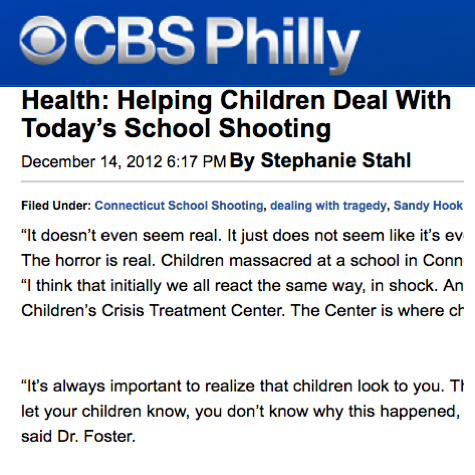 Newtown Connecticut School Shooting- Dr. Foster was onsite in Newtown, CT. in the aftermath of the Sandy Hook Elementary School shootings. She was interviewed by CBS during the Health Segment, titled "Helping Children Deal with Today's School Shooting." The link to the article and video can be found here > Click-For-Video

PHILADELPHIA (CBS) – Today’s school shooting in Connecticut is shocking for the children who lived through it and for those watching and hearing about the tragedy. There will naturally be a lot of fear and anxiety following this shooting, but experts say it’s important to reassure children they’re safe and encourage them to express their feelings.

“It doesn’t even seem real. It just does not seem like it’s even possible,” expressed a mother at the scene in Connecticut.

The horror is real. Children massacred at a school in Connecticut. How can you make sense of the senseless?

“I think that initially we all react the same way, in shock. And at times there is no rational explanation,” said Dr. Taliba Foster, a Psychiatrist with the Children’s Crisis Treatment Center. The Center is where children who witness violence in Philadelphia get treatment.

“It’s always important to realize that children look to you. They’re going to look to you to see your response and then react accordingly. It’s alright to let your children know, you don’t know why this happened, but that they’re in a safe environment and that you will help create that environment,” said Dr. Foster.

“Some children may become afraid of the dark, changes in their eating patterns. They may become irritable, just overall fearful,” said Dr. Foster.

“I think a lot of adults don’t really appreciate how much children have feelings and how their feeling may impact their daily lives,” said Dr. Foster. She says it’s important to stick to normal routines and limit exposure to the coverage.

“Stop hearing the story over and over again because I think parents don’t realize that just by hearing it again it re-traumatizing the families,” said Dr. Foster.

Dr. Foster says children who are upset by the shooting may be worried about going back to school on Monday. Again the best thing is to re-assure them.